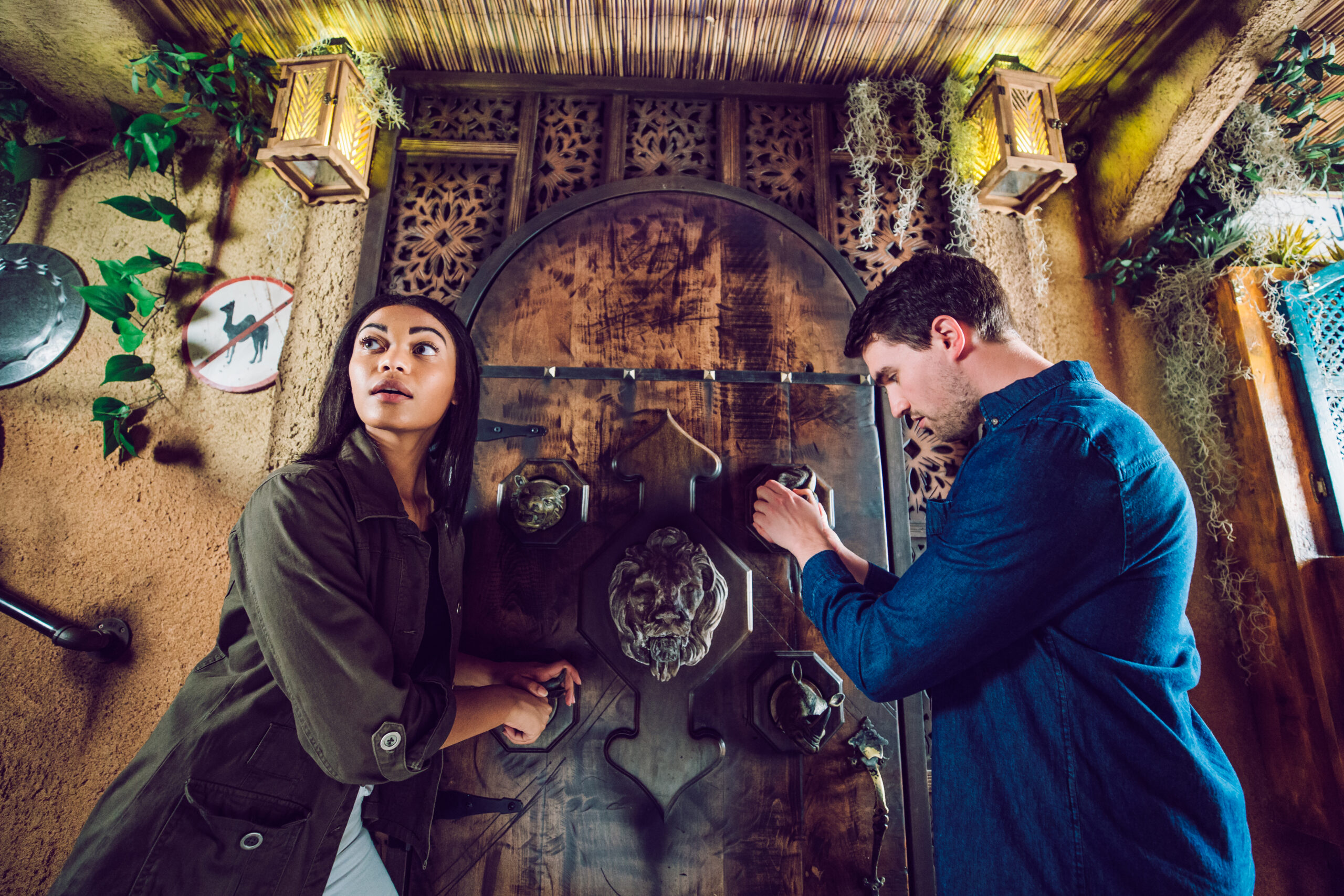 You may be wondering…

What in the world is an escape room? Are you really trapped in a room? Escape rooms are comically hard to explain (see the video below for proof), but don’t worry, we’ve got answers for you here.

So, what is an escape room?

An escape room is an immersive, 60-minute, real-life adventure game.

But what does that really mean? Let’s go deeper! You and your team meet in a themed room and have one hour to complete a mission and “escape” the room. That mission might be actually escaping something like a prison cell. In other cases, the “escape” is more mission-oriented, which may entail finding lost gold, launching a martian spacecraft, or completing an art heist!

How Do I Escape?

A successful escape requires you to uncover hidden clues, crack tough codes, and solve challenging puzzles. Each discovery and “aha” moment brings you closer to completing the mission.

Don’t forget to look underneath rugs, sift through the books on shelves, and take a closer look at all those paintings on the wall! Look for patterns, interesting similarities, or something that just doesn’t fit. For example, you may find a string of numbers under the rug and those numbers turn out to be what’s needed to open a combination lock.

Everything you notice is a potential clue and a puzzle waiting to be solved. But hurry, the clock starts ticking the moment you enter the escape room! 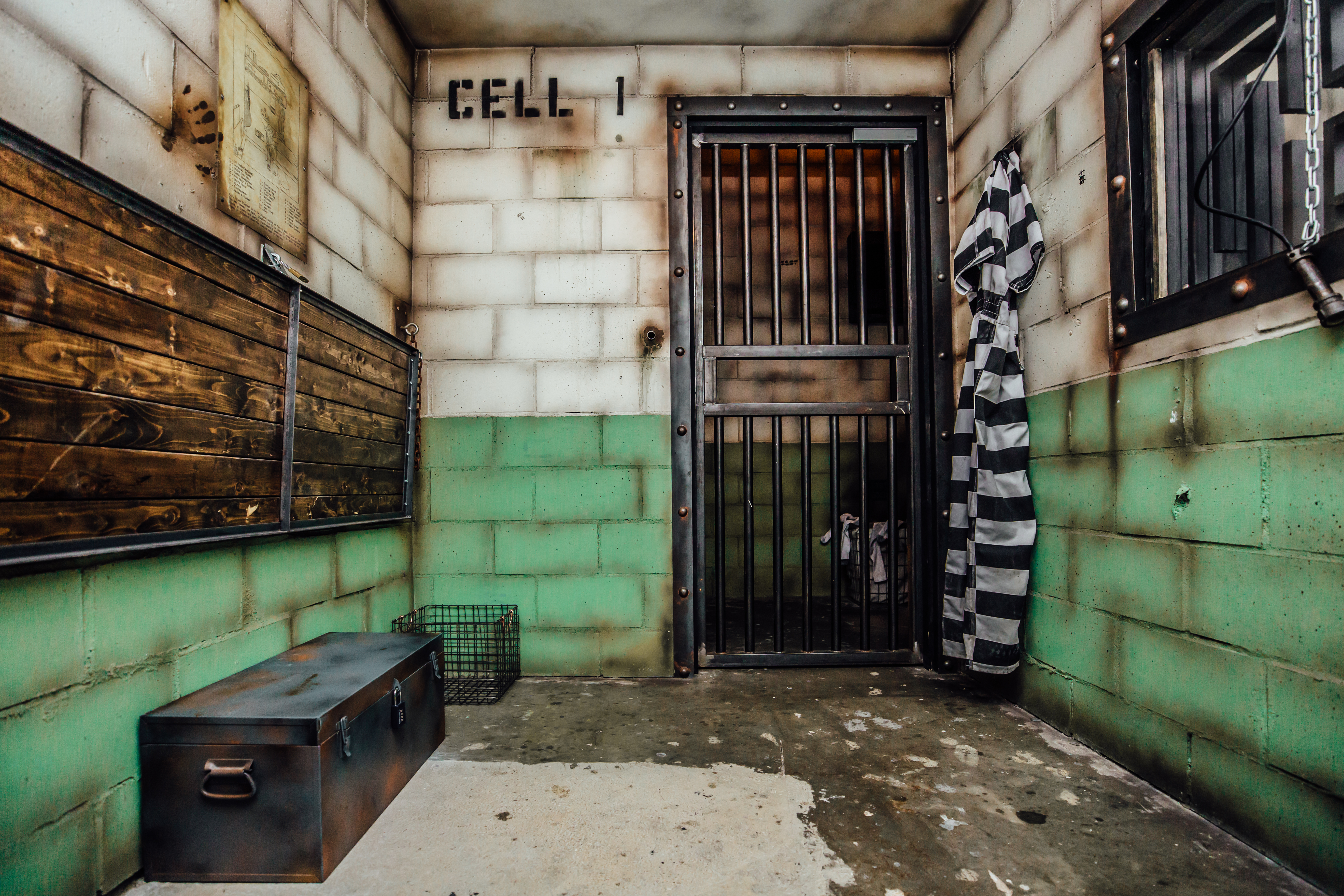 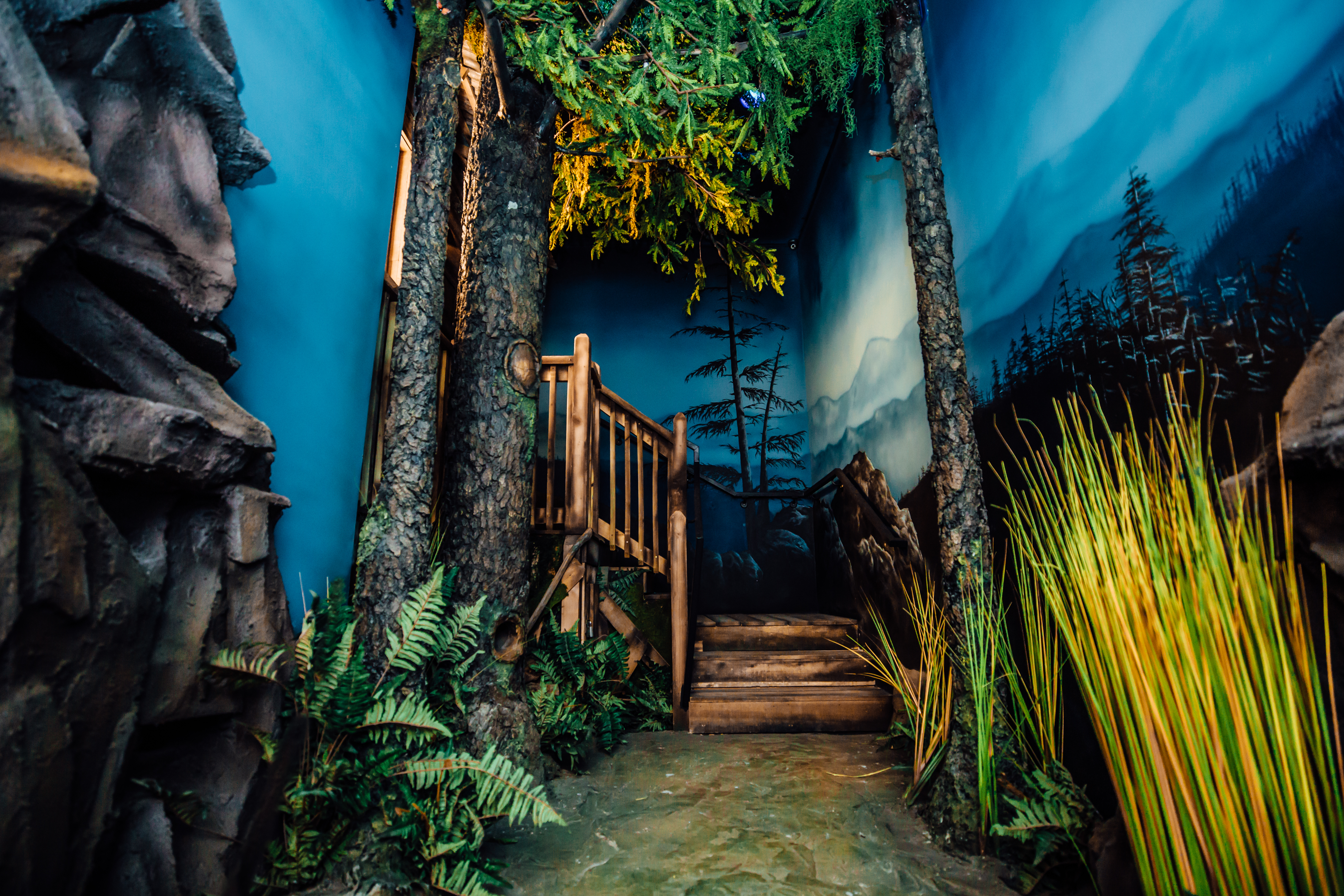 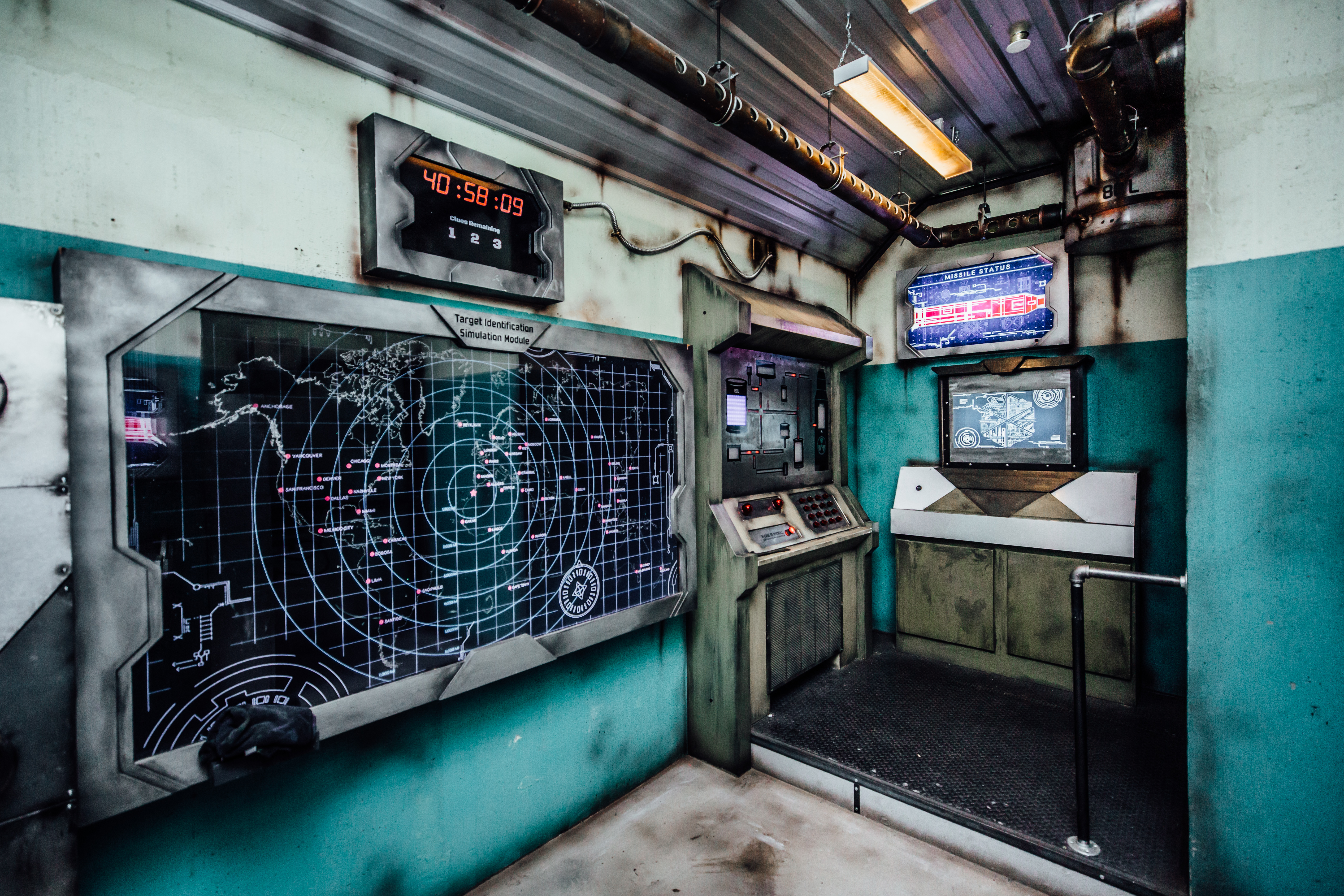 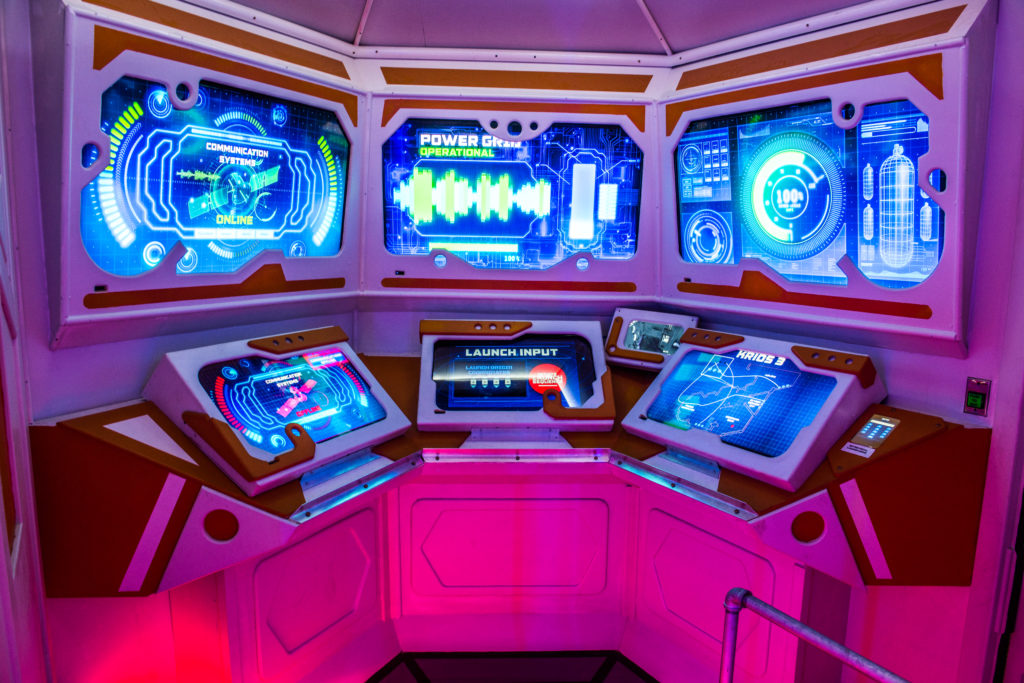 Is it good for team building?

In fact, The Escape Game recently surveyed some of their corporate clients and found that 10/10 companies reported improved morale following their escape room event and 9/10 reported improved communication. Even if you don’t actually “escape” the room, the whole team will have a blast and make memories that you will share for a long time.

Escape games are great for large groups, but you can also have a wonderful time by yourself! You can start in an escape game with strangers who will quickly become teammates. Some people even make friends for life with strangers in escape rooms!

What makes the best escape games so popular?

Escape rooms are a whole new way of experiencing storytelling. By combining social activity with interactive adventures and challenging puzzles, escape game players are immersed in an entirely new world with storylines that feel like Hollywood blockbusters. No wonder they’re so addicting! In recent years, the production value of escape rooms has reached a whole new level. Watch the video below to see the trailer for the game, Ruins: Forbidden Treasure.

What to expect when booking an escape room 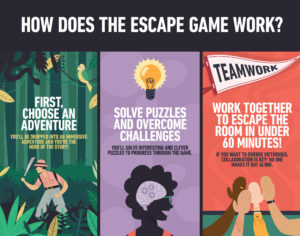 Before you start playing, you will have the option to choose from multiple different missions. Each escape game room has its own unique mission. You get to choose your adventure by selecting the mission you want to challenge yourself to complete. Maybe you are trying to steal a piece of priceless art from a museum, or exploring a treacherous ancient ruin, or navigating the depths in a research sub.

Once you step into the escape room, you are instantly transported into a different world, as your room surroundings match the mission theme! You could find yourself standing in a fancy art gallery, behind bars in a prison cell, or at the command module of a spaceship complete with high-tech screens and controls.

These immersive worlds help you feel like you’re actually living out the story of your mission! Inside the room, your Game Guide, the escape room staff member who helps you throughout the game, will make sure that you are clear on what an escape room is, the rules and answer any initial questions you have. Then, you will watch a video that explains your mission in full. Once the video ends, your one-hour timer starts counting down! From then on, you’ll be directly interacting with the objects and props in the room to uncover all the clues to get out of your escape room!

Here’s an example of a mission video that you would see at the beginning of a game. This video is from The Escape Game’s The Heist!

Don’t worry, you won’t be left totally alone in the escape room! You and your team will be helped through your mission by a Game Guide, who monitors your game through cameras and microphones in the room. If you want a clue, your Game Guide is the one who will give it to you. Your Game Guide also may volunteer a few extra tips to help your team escape the room throughout your adventure. Escape rooms are meant to be challenging, but still fun and solvable!

Are you really locked in the escape room?

We know what you’re thinking because we get asked this all the time: Are you really locked in a room? Nope! If you need to leave the room at any point during the game, you’re always welcome to step out.

What happens if you don’t complete the escape room in time? If you don’t escape in time, that’s okay! Whether you finish the mission or not, your Game Guide will meet you at the end of the game and open the room up if you haven’t escaped yet. While it is exciting to be able to successfully escape, escape rooms are still lots of fun for groups who don’t manage to make it out during their first attempt–it gives them a goal to work towards the next time they come and play!

What makes The Escape Game the best escape room?

At The Escape Game, each and every one of our unique rooms is designed and constructed by a team of professional designers, architects, technicians, and carpenters. We believe in putting intentional effort into every aspect of our games, especially as escape rooms become more common across the world!

There are now close to five thousand escape rooms worldwide! You can play an escape room in England, Thailand, Korea and beyond! While the expansions of escape rooms makes finding one near you very easy, not all escape rooms are made equally. Escape rooms differ in overall quality and presentation.

The Escape Game is the top escape room company in the US on TripAdvisor, with 8 out of the top 10 “Room Escape Games” in the country. Each location is also rated #1 of “Fun and Games” in its city. We believe this is because of the quality of the design and construction of our games. We design our games to be “epic for everyone” and after 3 million players we’ve developed a good sense of what makes a great escape experience! Watch the video below to see how the team created Special Ops: Mysterious Market!

Our escape rooms offer a variety of puzzles, clues, and riddles ranging from digital and tactile to geometric and pattern-based. All of the escape games are challenging, fun, and safe for children and adults alike. We’re a team of thinkers and builders who love to create the most immersive escape rooms out there.

What about virtual escape rooms? (added 2021)

COVID lockdowns led to an enormous uptick of online escape rooms and games that can be played from home. During lockdowns, friends were looking for new ways to connect. Work teams started searching for virtual team building activities. Escape rooms were looking for ways to keep their businesses going. All of these factors led to an explosion of virtual escape room options. There are many kinds of virtual escape rooms from point-and-click apps, to audio-only narrated games, to live and hosted events. Watch the video below to see how The Escape Game’s Remote Adventures work. In these games, your Game Guide is in an actual escape room streaming live. You and your group direct the Game Guide through the adventure over Zoom!

If you’re looking for something to play right now and on your own, we recommend trying out Unlocked. These at-home mystery games are challenging and immersive and players can start, stop, save and pick back up whenever they’re ready!

Virtual escape rooms show no sign of slowing down and it’s clear they will be around long after COVID restrictions are lifted.

READY TO BOOK YOUR ADVENTURE?

We have locations across the country! Choose your location, learn more about The Escape Game, and book your game HERE.

THE HISTORY OF ESCAPE ROOMS

The concept of escape rooms began with first-person adventure video games where players interacted with their surroundings by clicking on-screen objects. Video games like Myst and Crimson Room allowed players to control their environment with just a mouse and a few simple commands. Certain elements of these point-and-click adventure games–interacting with hidden elements in your surroundings, solving puzzles, goal-oriented plot lines became key features in what later became known as “escape rooms.”

The first documented escape room was created by a Japanese company called SCRAP in 2007. Players were ushered into a themed room where in order to escape, they had to solve a series of puzzles and riddles in a set period of time. Before long, escape rooms became popular, permanent fixtures in Japan and spread to China and the rest of Asia. Around this time, the first escape room in Europe opened in Hungary. Throughout the next five years, more and more permanent escape rooms populated Europe and Asia.

Escape rooms were introduced in the United States around 2012. The Escape Game–that’s us!–began building their first escape room in 2013. The founders of The Escape Game sought to create more impressive escape room locations than the ones currently in the United States, which were often lackluster rooms filled with just boxes, furniture, and puzzles on pieces of paper. They envisioned building high-caliber live escape rooms that could rival even the best ones in Asia and Europe.

They opened up their first escape room location in Nashville, Tennessee in 2014 and have since become the #1-ranked escape room on TripAdvisor in every city they’re in – find an escape game location near you! To this day, The Escape Game aims to create, design, and build the most challenging and immersive escape rooms out there.