The “Key” to Escape Room Locks and Puzzles 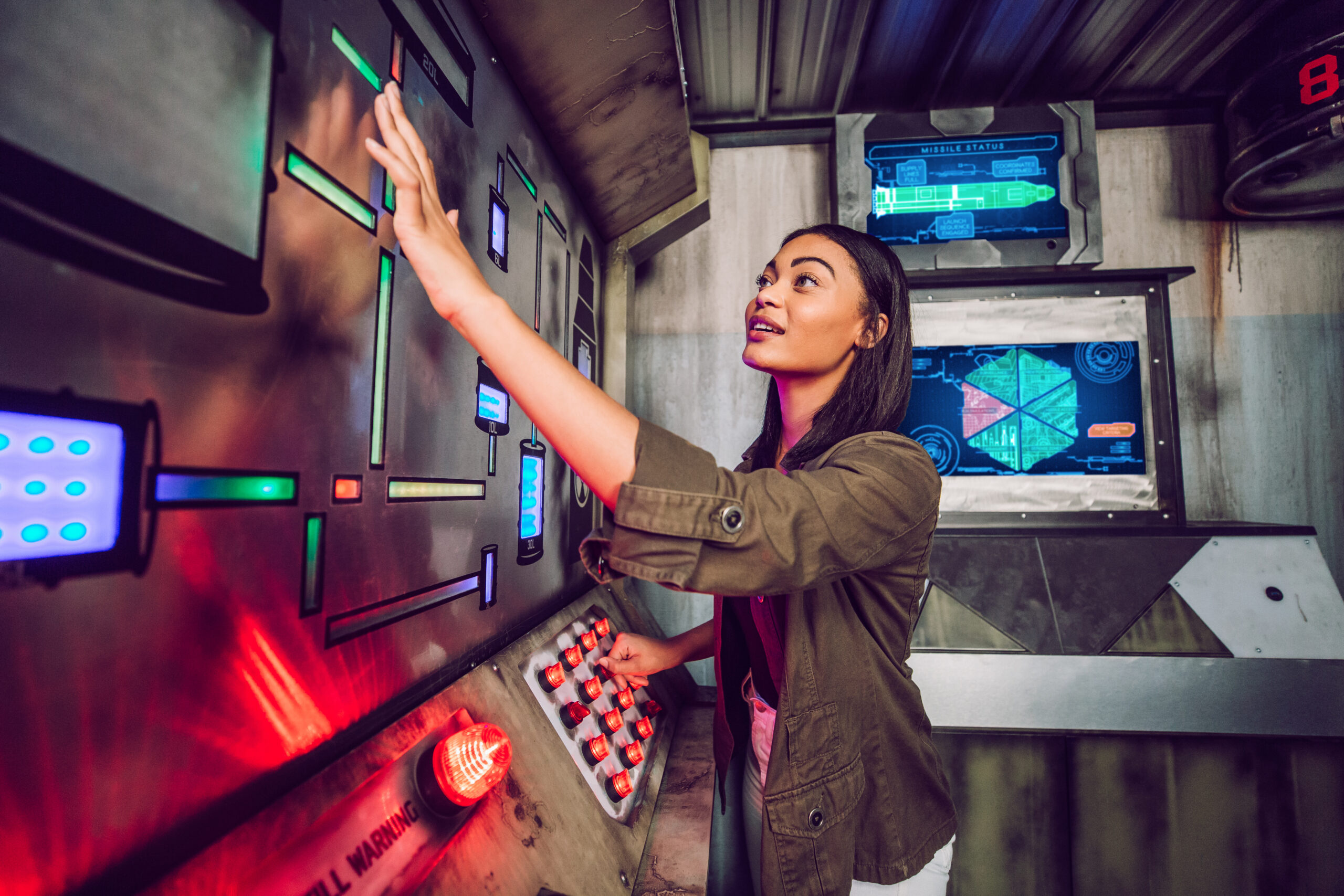 It takes many different skills to complete an escape game.

In any escape room there are puzzles to solve, locks to open, and challenges to overcome. Players must complete each puzzle in order to win the game and escape from the room! Though escape rooms come in many different forms and themes, similar types of puzzles and locks exist in most of them. Learn more about them here so you can tackle your next escape room!

Most escape games will involve at least a few good old-fashioned locks. Four of the most commonly used are padlocks with keys, numerical locks, word locks, and directional locks. While this isn’t an exhaustive list of escape room locks, being familiar with them can save valuable time within a game.

A padlock with a key is one of the most common types of locks. Built to withstand the test of time (and thousands of players!), padlocks are a super popular option. They’re also affordable and very easy to find in stores.

One challenging aspect of escape room padlocks and keys is that the puzzle is two-fold. Players have to find both the key and the lock! The puzzle can even be three-fold if there are multiple padlocks around the room. Which lock goes with which key?

Pro tip: A single key typically opens only one padlock in an escape room and is used once. After finding a matching key and padlock, leave the key in the lock to avoid getting keys mixed up with one another.

There are many ways an escape room can have you find the code that opens the padlock. For example, they might have you solve a riddle that ends in a date, and that date cracks the code. Another option is that there might be four separate puzzles that you have to solve. These separate puzzles can each have one number at the conclusion, and the numbers together will unlock the padlock.

Players must demonstrate excellent teamwork and put their heads together to figure out which numbers are correct!

Padlocks with word codes are very similar to padlocks with numerical codes. They look and function exactly the same, but (no surprise here) word code padlocks are unlocked with 4-6 letter words.

There are many ways the escape room might have you find the word that unlocks this padlock. You might have to find a very specific word in a book, solve a riddle, discover a missing word from a poem, or unscramble a word. Lean into your teammates for help here! There is strength in numbers. Or, in this case…words.

If you get the code incorrect on the first try, make sure you remember to completely reset the escape game lock by twirling the combination wheel to the right for three whole rotations.

Directional locks aren’t as commonly found as the ones we’ve already covered and they’re pretty tricky to operate. These locks are opened with a series of left, right, up, and down “clicks.” There is no limit to how long a directional lock code can be so you might be in for a real head scratcher if you keep losing your place with a long code.

Directional lock codes will usually be given in an up/down/left/right fashion or north/south/east/west.

Not only is cracking this code tricky, but resetting the padlock is, too. You can’t tell if the device has been reset just by looking at it. If you think you’ve reset the padlock, and you really haven’t, you’re sure to enter the code incorrectly time and time again.

Upon first glance, diversion locks don’t look like a lock at all. These types of locks are often a disguised lock box. The lock box could look like a book, a rock, a lamp – you name it! Escape rooms can get really creative with these so they’re quite difficult to locate.

Keys found through puzzle solving and riddle cracking typically open diversion locks. Inside, the diversion lock usually contains an object that will get you one step closer to solving the escape room.

These locks are fun and tricky because they aren’t really locks at all – meaning they’re very easily disguised. Magnet cabinet locks will hold a door or cover against a frame and can easily be opened by pressing on the lock once. The pressure will release the magnet and the door will swing open.

Magnetic cabinet locks are great for escape games to use because, even though they are very easy to open, they can be very hard to find. Your team will have to listen carefully to the clues and spread out in order to find it! Then you’ll have to make sure you press exactly where the magnetic lock is located.

Cryptex locks look like something right out of a fantasy or spy movie. This type of lock for escape rooms is great for rooms with an old-fashioned theme because they really fit the aesthetic. This type of lock has 5-6 rings that each have the full alphabet on them. Players often need to solve several puzzles to figure out exactly which word will unlock the Cryptex.

Once you familiarize yourself with the different types of locks you are likely to see in an escape room, it would also be helpful to learn about a few of the types of puzzles you will encounter! Some of these puzzle types will yield codes for you to put input into locks, but others help you progress in your escape game adventure without the use of locks at all.

Logic-based challenges are very common in escape rooms. These are puzzles that don’t involve moving anything physical in the room, but instead require you to make mental leaps to figure out what you should do next. These logic based challenges in escape rooms are often used in combination with various types of locks, because most of these puzzles yield codes.

These puzzles appear in many forms and at various levels of difficulty. One might be as simple as collecting all the elephants in the room and using the numbers on the bottom in a particular order, but another may require you to compare and accurately identify scents.

Though it is not uncommon to find math problems in an escape room game, you shouldn’t worry if it’s been a few years since you’ve taken an algebra class. You won’t need any complicated calculus or trigonometry. After all, most rooms are designed to be tackled by 15 year olds and 85 year olds alike.

Usually some fairly straightforward addition or maybe some simple multiplication is all you will need to use in an escape game. The math itself is unlikely to be a stumbling block for your escape room team, even if employed in clever or tricky ways. For example, you may need to count specific types of items in the room and add them to get a code. But the tricky part is not the addition, rather than finding the hidden items.

Some puzzles don’t require locks or codes, but instead require physically manipulating items in the room. These challenges add a layer of complexity to your escape because you can’t always immediately identify them as puzzles since they don’t involve a locked element.

Maybe you need to move statues, use mirrors to deflect lasers, or turn dials to specific settings that you found elsewhere in the room.

The puzzles still involve logic. However, instead of getting a code when you solve the puzzle, the progress of solving the puzzle will allow you to progress to your next challenge in the escape room.

For example, one puzzle may require you to rotate several items according to a reference picture. When you get it correct, you don’t get a code or a key but a door behind you may unlock. Or perhaps after putting books in the correct shelf locations, the bookcase pops open to reveal another room behind it. You never know what could happen in an escape room, so you should always be aware of your surroundings!

Escape rooms are all about using your environment to advance through the room and eventually make it out. The games can incorporate lights and sounds into puzzles in surprising ways!

The flickering lamp in the corner might be speaking to your in morse code. The birds chirping through the speakers might be saying a secret message. A tiny light might indicate you’re in the right direction. A song might have lyrics that are more important than you initially realize.

Just remember that game creators don’t place items into an escape room by accident. If a light or sound catches your eye, it’s probably because it’s important!

Draw or Map Out Numbers

Escape games are super interactive, which means you’ll really need to get involved with the items around the room. Even more important, you’ll need to work well with your teammates! Puzzles that require drawing or mapping out numbers will usually require inputting a series of coordinates into a map.

After laying out all the coordinates, the map usually reveals new information. You might know which direction to head or see a shape that will solve a puzzle. Perhaps you will get a word that unlocks a secret door and uncovers another clue.

Make sure you keep an open mind when drawing or mapping out numbers. Something that looks like a complete jumble will likely make sense once you finish.

There’s nothing more classic than a good, old-fashioned jigsaw puzzle. However, escape games will usually put a little twist on this classic. Instead of putting together traditional puzzle pieces, players might have to rearrange paper shreds, books titles, or paintings on the wall.

Once you’ve correctly arranged the “puzzle” pieces, they’ll reveal a clue, bringing you even closer to beating the escape room.

Knowing the different types of locks and puzzles in an escape room will help set you up for success!

This knowledge is especially helpful if you’re getting ready to go on your first escape room adventure. With this information under your belt, you’ll definitely recognize a lock or puzzle in an escape room when you see one!

Now that you’re ready to play an escape room, learn about how your personality can help your team!

They beat Playground as a 2-person team! Have you

[NEW GAME] Play our new @rugrats escape room as a

We are pleased to announce the winner of our Depth

This limited-time game will be available to play i

Thank you to everyone for tagging us in your epic

Playground is now available in Cincinnati!!🥳 We

[NEW GAME] Who's ready to help Tommy, Angelica and

We love seeing pics of you guys playing! Don’t f

Hope you’re all having a great week! Who’s rea

Being stuck in prison isn’t so bad when you can

Finding hidden treasure is even better when hats a

Recovering stolen paintings makes for a great nigh