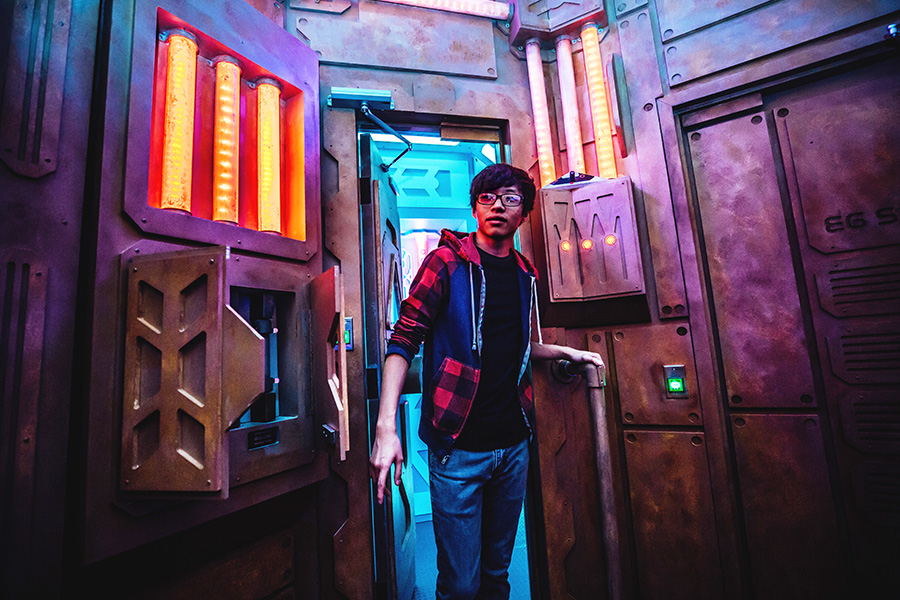 Every game fanatic has a friend who is just not good at games.

No matter how many times they’re taught a concept or shown the latest competitive fad, said friend would rather stick to the classics they know, if they play any games at all! However, that’s no reason not to play an escape room together! But how can the experience be enjoyable for both a game enthusiast and a friend who is more…game-challenged, to put it gently? Read to find out!

The friend who is chronically bad at games probably isn’t jazzed about playing an escape room in the first place. Understandable. But The Escape Game is unlike ANY OTHER GAME! This is not your run-of-the-mill, roll-the-dice, flip-a-card board game. Nor is it a video game that requires some level of skill to be fun. An escape room is an elevated, unplugged adventure. Walking through the entrance of a game is like entering a Hollywood movie set, dropping you right into the action, with clues and interactive elements to discover throughout the entire mission.

The Escape Game also offers different, exciting adventure options that can suit various tastes and interests. From daring cosmic escapades to undersea mysteries, each room is a fully immersive endeavor. And your team gets to be the real-life heroes of the story!

It’s not just a game. It’s an EXPERIENCE.

Is your friend concerned they’ll be a handicap to the team? Let them know that’s impossible! The way that The Escape Game puzzles are created, every team member, no matter their level of expertise, has the opportunity to contribute and shine. Adventures are more easily completed when different kinds of people with various talents and skills are part of the team.

Perhaps one team member has a knack for cracking codes. That’s great! But escape room puzzles can’t be solved without CLUES. That’s where the friend who struggles with competitive problem solving comes in! Maybe they aren’t sure how to decipher a code, but said friend can still find clue items around the room and notice out-of-place objects.

Both puzzle solving and clue discovery are vital tasks to completing any mission and escaping rooms in time. It’s more important to be able to help in one area than expect everyone to be amazing at all aspects of the game.

That’s why there are clues! It’s perfectly normal to get stumped somewhere within the adventure. Sometimes people who take winning quite seriously are hesitant to use the available clues because it means they didn’t escape “all on their own.” But those clues are there for a reason! Rather than waste valuable time, stuck on a confusing puzzle, requesting for a clue can quickly help the team continue moving forward. And there’s no penalty for doing so! It’s smarter to request a clue when you feel you need it and your team is more likely to actually complete the mission!

“It will be too competitive.”

Not if you’re on the same team! The friend who’s bad at games likely does not enjoy when their skilled friends get overly invested into gameplay. However, in an escape room, friends are teammates, not competitors! Game fanatics can make an effort to channel their competitive energy into encouragement for the team. Similarly, friends who are normally bad at games can embrace the chance to support a team of skilled players and work together for the win, rather than feeling defeated if they are accustomed to losing.

One of the elements that makes The Escape Game so special, is that there are numerous tasks to accomplish. Teamwork is essential to completing the mission. Though you may be tempted to try doing everything yourself, it’s more beneficial (and more fun!) for the team to delegate tasks. The most successful teams are the ones who work together rather than against each other.

An escape room is the one game a friend CAN’T be bad at. And even if, for some crazy reason they are totally useless in game, they’ll probably still enjoy themselves! The point of playing The Escape Game is the chance to experience a hands-on, one-of-a-kind adventure together. No matter your skill levels, you may escape, but you WILL have fun!

Whether you’re an escape room veteran or a first time player, it’s always helpful to know a few tips and tricks of the game! Check out our ultimate guide on beating an escape room!