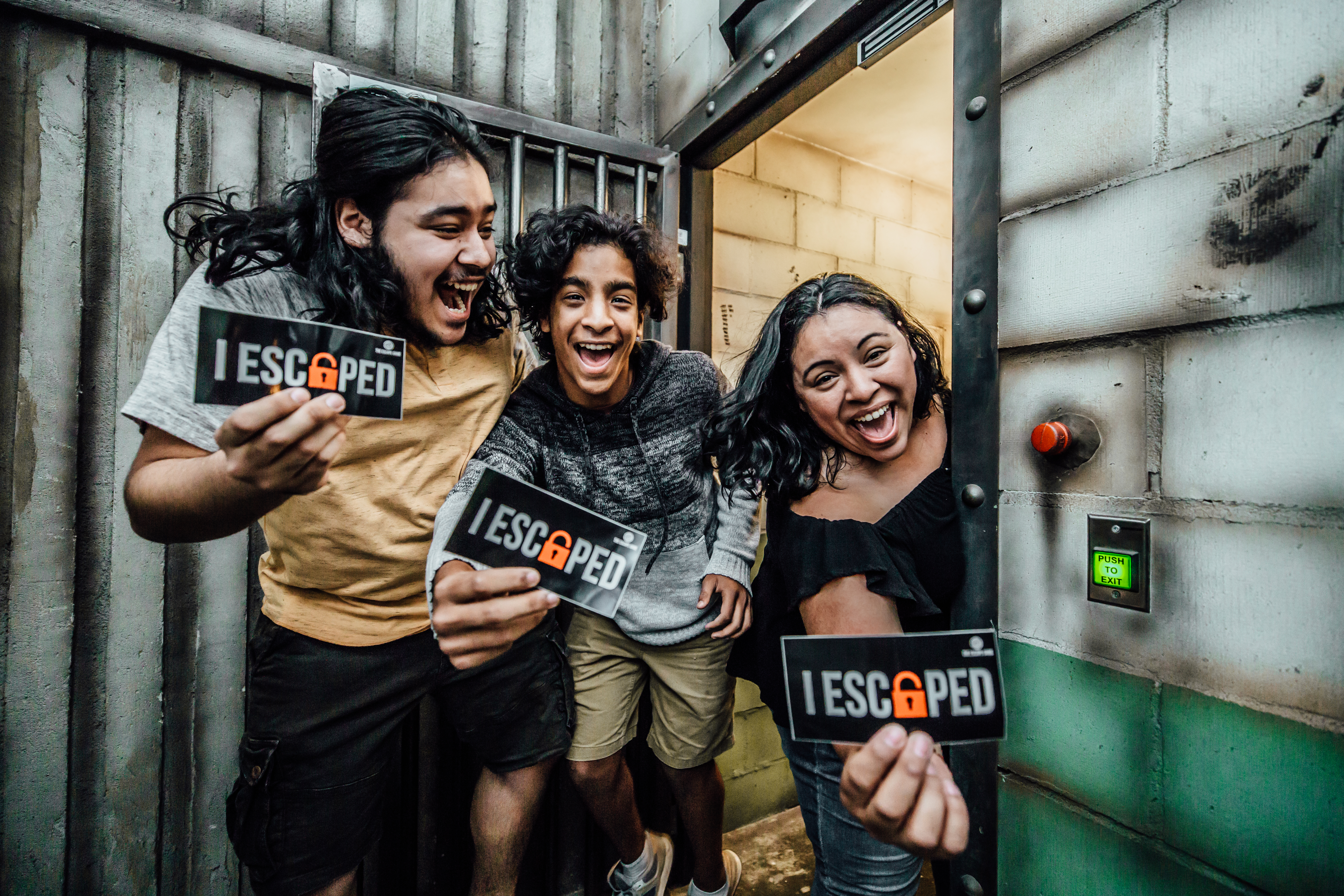 Have you ever wanted to know how to set yourself up for the perfect escape? We have collected our most useful insights from game designers and experienced escapees alike to bring you the best strategies for a successful escape. 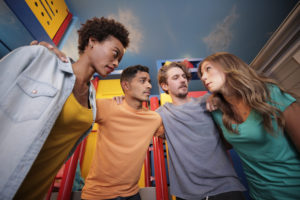 There are few things you can do before an escape room activity starts that are more important than choosing your teammates. The people in the escape room with you, after all, are your greatest resource. Their minds, attitude, energy, skill set, and ability to work together are very likely to be the determining factors in your successful escape–so choose carefully. You don’t want to stack a team with a bunch of people who think exactly like you. Instead, find a group of friends, family, or coworkers who bring different perspectives to the proverbial table (and literal room). When solving escape rooms you don’t need to bring all the “smartest” people you know. Genius comes in many shapes, and there is real value in common sense and street smarts.

Pro Tip: Don’t worry if you aren’t bringing a full team to get out of the room. You might be placed in an escape game location with strangers who could end up being exactly what you need to complete your team–and you could make friends for life! An ideal team is diverse in skillset but identical in attitude–excited and ready to get out of the room! 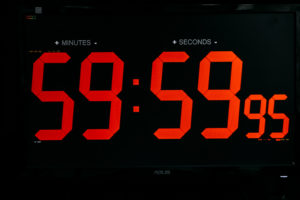 For many escapers, experienced and beginners alike, there is a small amount of anxiety mixed in with the excitement of approaching a new escape room. One way that this can be mitigated is to give yourself plenty of time at the venue before the escape game begins. The last thing you want to do is limit your time in the room by arriving late to the venue. You do, indeed, have to get into the escape game in order to be able to escape from it.

Pro Tip: Another reason to get to The Escape Game early is so that you have time to use the restroom before the game begins. You don’t want to need to be excused from the escape a room game in the middle because the clock will keep ticking if you take a restroom break.

Be Clear About The Rules 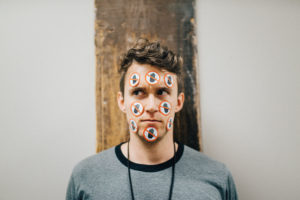 Your game guide will go through the rules before every escape game so that you are familiar with what you can and cannot do in a room. Listen to them. They are not trying to trick you while they give you the ground rules–they are just giving you ground rules. If they say not to take anything off the walls, do not take anything off the walls. Usually, there will be a sticker on things that you cannot touch. You don’t want to lose time if someone has to come into your room to tell you not to do something, or break anything that will affect your experience or those of future escapers. Plus, you will be wasting time doing things that won’t help you escape. Once you have been given the rules, ask any lingering questions that the rules haven’t covered.

Pro Tip: Every escape room game is different, and knowing what questions to ask before your timer starts can greatly increase your efficiency in finding and solving puzzles. While it is best to develop a personal list from your own solving escape rooms experiences, here are a few to get you started: Can we take things off the walls? Will we need to take apart any furniture? How do we ask for/receive clues?

Pay Attention To The Intro Video

Escape puzzle rooms have themes and stories that help you become immersed in the world and give you a goal you must achieve in order to escape. There is often a temptation to start looking for clues to get out of an escape room instead of listening to the introduction to the story of the room. Even experienced escapers (sometimes especially experienced escapers) are so eager to start solving clues that they forget that clues to get out of an escape game could be hidden in the intro video. At the very least, the video will tell you about your ultimate goal (solving an escape room), which will help you put yourself in the story and get in the right mindset to attack the room. Whether your goal is to fix the malfunctioning pieces of your spaceship and escape Mars or to finish all your assignments so you can make it to the kickball game on time, the intro video will outline the major tasks you need to complete in order to put all the pieces together and escape the room–so pay attention.

Pro Tip: You won’t be doing anything wrong if you start glancing around the room and taking mental notes during the intro video, but it may not save you the time you think it will. In fact, not being totally immersed in the story could cost you time later when you have to figure out how close you are to your end goal.

How to beat escape rooms during the game…

Split Up And Search Everything 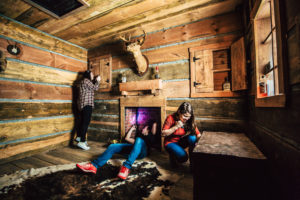 When the timer starts its countdown, begin your attack of the room. Split up and open everything you can find. Open doors and desk drawers and books and boxes and cabinets and trunks and chests. Look under rugs and tables and chairs and anything else that’s not nailed down. If you can take things off the walls, take things off the walls. If it doesn’t have a sticker that tells you not to touch it, touch it. There is nothing quite like the organized chaos (and sometimes just plain chaos) of the first few minutes when solving escape rooms. While we wouldn’t go so far as to say the first few minutes make or break your ability to succeed, they are very important towards setting the tone of your escape experience. Start strong by scattering your team around the room, but make sure that you put all the clues to get out of the escape room you find in a common area so that everyone can find them and start solving puzzles.

Pro Tip: If you are a first-time escaper and are in a room with experienced escapers, the first few minutes can be very intimidating. They already understand the secret to escape rooms, while you have found a puzzle piece in a drawer but you don’t know what to do with it. Don’t panic, just start communicating. 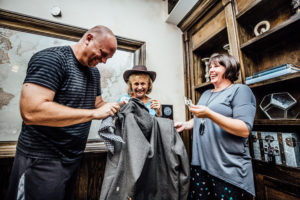 No clues to get out of an escape room will help you in your escape as much as your ability and willingness to communicate. Talk about what you see, talk about what you hear, talk about what you think about what you see and hear. Just like opening drawers and putting things that you find in a commonplace in the room, putting your thought processes out into the room will help your team work together to solve puzzles. There will be times communication is required because the clues to get out of an escape room require more than one person to solve them–for example, a diagram painted on a wall that helps you arrange wires in another room. There will be other times when communication will be key to solving a puzzle simply because two brains are better than one, but only if the brains are talking to each other and can build off one another.

Pro Tip: One of the most important reasons that communication is vital to your successful escape is the amount of time it can save you. Make sure that everyone knows which clues have already been found and solved so that no one wastes times on something that has already been done. 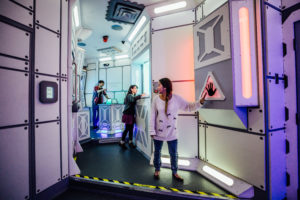 If five people are working on the same clues to get out of an escape room, you probably have too many hands on the padlock. Also, you are probably wasting valuable time you could be using to solve two other clues simultaneously. Don’t be afraid to delegate tasks. If someone on your team looks like they don’t know what to do next, they will probably be grateful if you kindly pointed out a puzzle they could start solving. If one person is able to take charge of assigning distinguishable tasks, everyone is better able to keep track of what has been done and what still needs to be done. While some puzzles will be harder than others, all puzzles are important, since you must solve them all to beat an escape room.

Pro Tip: Don’t be afraid to switch tasks. If you are stuck on a puzzle, grab a teammate. Explain what you have figured out so far and let them take a stab at solving it. You can save a lot of time-solving escape rooms by moving on and finding a different puzzle more suited to your strengths.

If You Need A Clue, Ask For One

The age-old question: To ask for a clue or not to ask for a clue? This is a point of pride for many teams. But consider this: would you rather ask for two clues and beat an escape room, or waste so much time being stuck on various puzzles that you don’t escape? Often, you can’t tell how much of the escape room you still have left to solve, so it’s hard to judge how much time you need to complete the rest of your tasks. Can you escape? Do you have an extra five minutes to wander around looking for the next clue, or do you need to use every minute you have left to reach your goal? If the whole team has been stuck for a minute or two, ask for a clue. There is no shame in asking for hints for escape rooms; in fact, it shows wisdom and good time management skills.