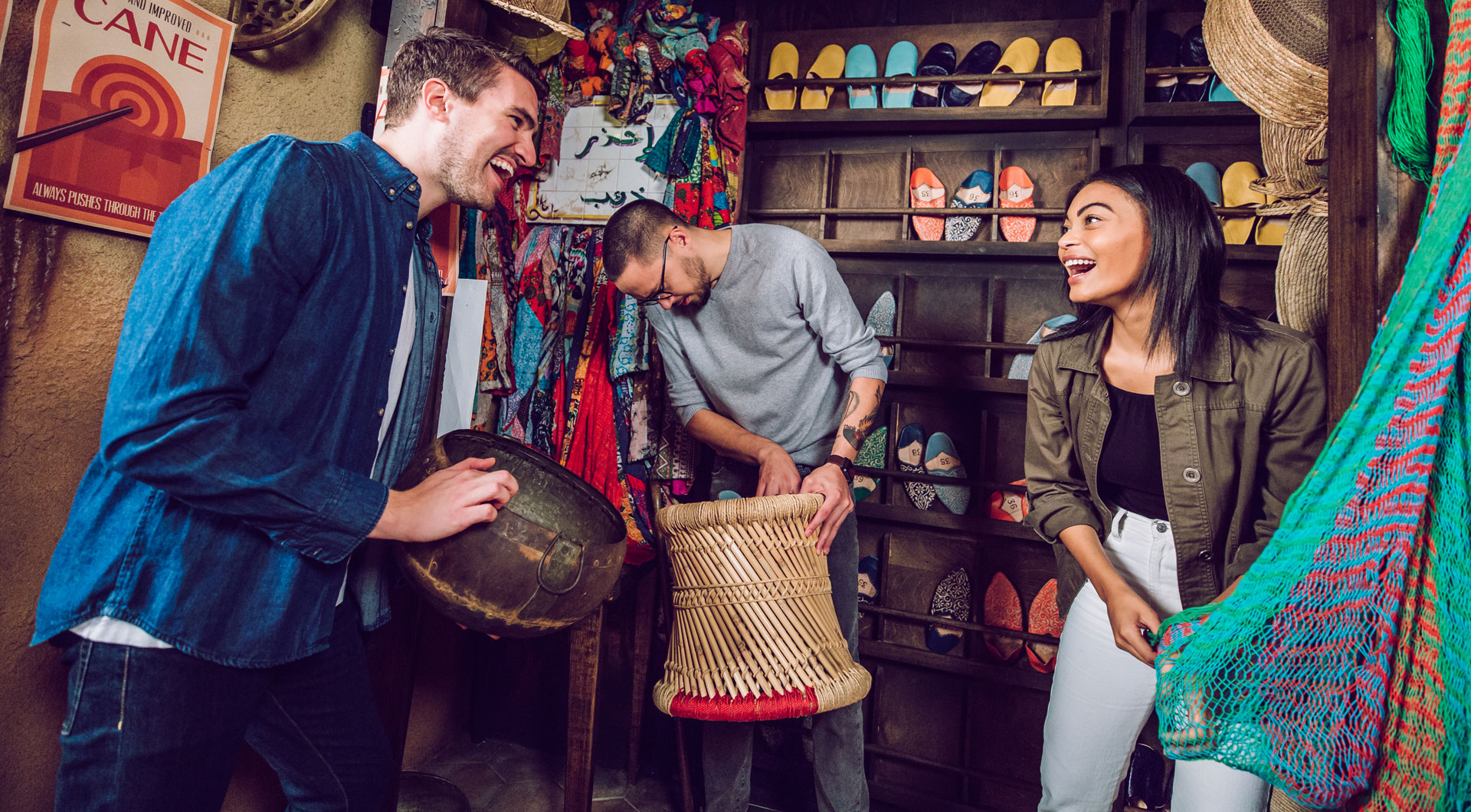 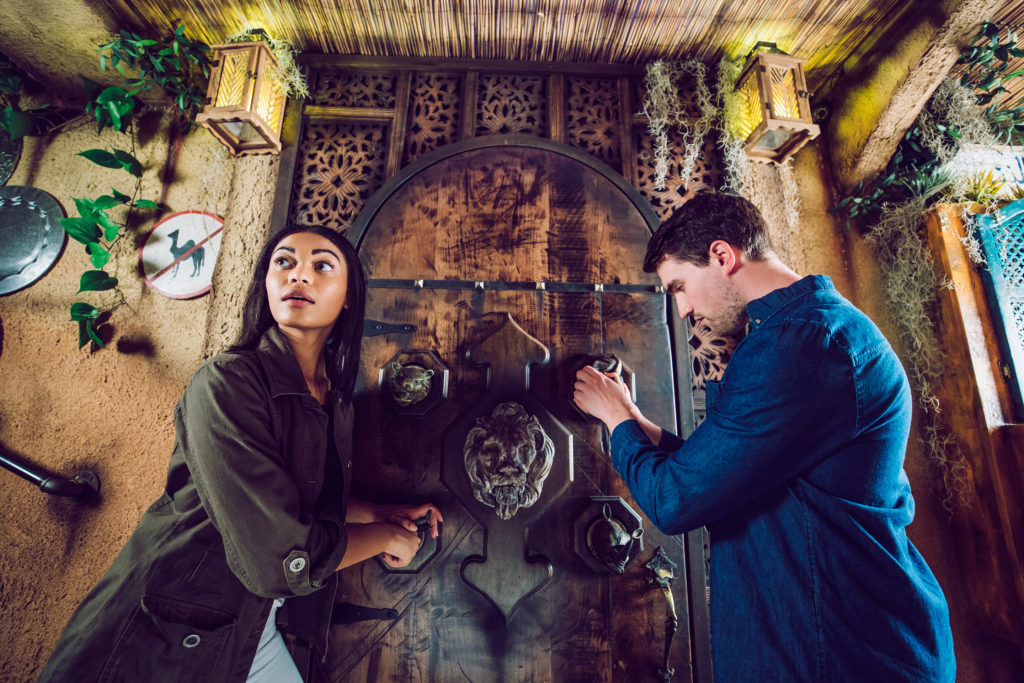 How To Have Tough Employee Conversations

Employee discipline, correction, or “tough conversations” are certainly not a fun topic, but surely one of the most important if you are trying to create a high performing team and company. In a study conducted by Brené Brown, leaders identified ten barriers to building and growing their teams. The barrier that leaders felt the most unable to surmount was having tough conversations and giving honest productive feedback. Honest feedback is tough, possibly the toughest thing a leader is asked to do, but essential to building a healthy team. As Brené Brown says, “Clear is kind, unclear is unkind.”

At The Escape Game, we believe that team members deserve our best and our best has to include honesty. One of our Values as a company is Growth. We strongly believe that people are going to grow when we are honest about things that are working and honest about things that are not. If we avoid difficult conversations, then we are hurting, not helping, our teams’ growth. Ken Blanchard says that “Feedback is the breakfast of champions.” If you want to build a team of champions then you have no choice but to provide feedback to your team, both positive and negative.

When facing something as personal as an employee correction conversation, thinking about the bigger context and long term ramifications can help put the moment in perspective. As a leader, your team quickly learns the difference between what you say and what you tolerate. If the two are exactly the same then you have consistency and clear expectations; after all, clear is kind. If the two begin to diverge, then you have effectively lowered the bar for everyone. Failing to address divergences from the written or articulated standard is the same as removing the standard. In situations like this, you as a leader are being very unclear and also very unkind. It is incredibly confusing and discouraging for employees when you say one thing but allow their peers to get away with not complying with that very same thing. Failing to hold a consistent standard and adequately address divergences leads companies into the following types of toxic behaviors:

When we fail to hold the whole team to the standards that have been set, they quickly stop acting and looking like a team. Who wants to be on a team that doesn’t have a clear direction or expectations? What you tolerate quickly becomes the culture regardless of what you say. Tough conversations are simply not something that can be avoided.

In order to coach your team effectively and ensure that consistent standards are communicated, it is imperative that you treat every team member equally in terms of disciplinary procedures.

For this reason, you need to set procedures in place for how you will handle all team member infractions. This will mean that you, as a manager, will have to have the personal discipline to be consistent with how and when you discipline.

We have included templates we use for verbal and written warnings for disciplining team members. It may be a shock to certain team members, initially, when they realize they will actually be given documents that must be signed and filed every time they break one of your standards, but it will also bring consistency and stability to the team. People perform better when there’s clarity. Each member of your team should know exactly what is expected of them and what happens if expectations are not met.

VERBAL WARNINGS:
Verbal warnings are the first level of corrective action in response to team member coaching moments. A verbal warning should be issued to a team member for any deliberate breach of stated company standards. Below is a verbal warning template that you can use or modify as needed for your company’s needs. 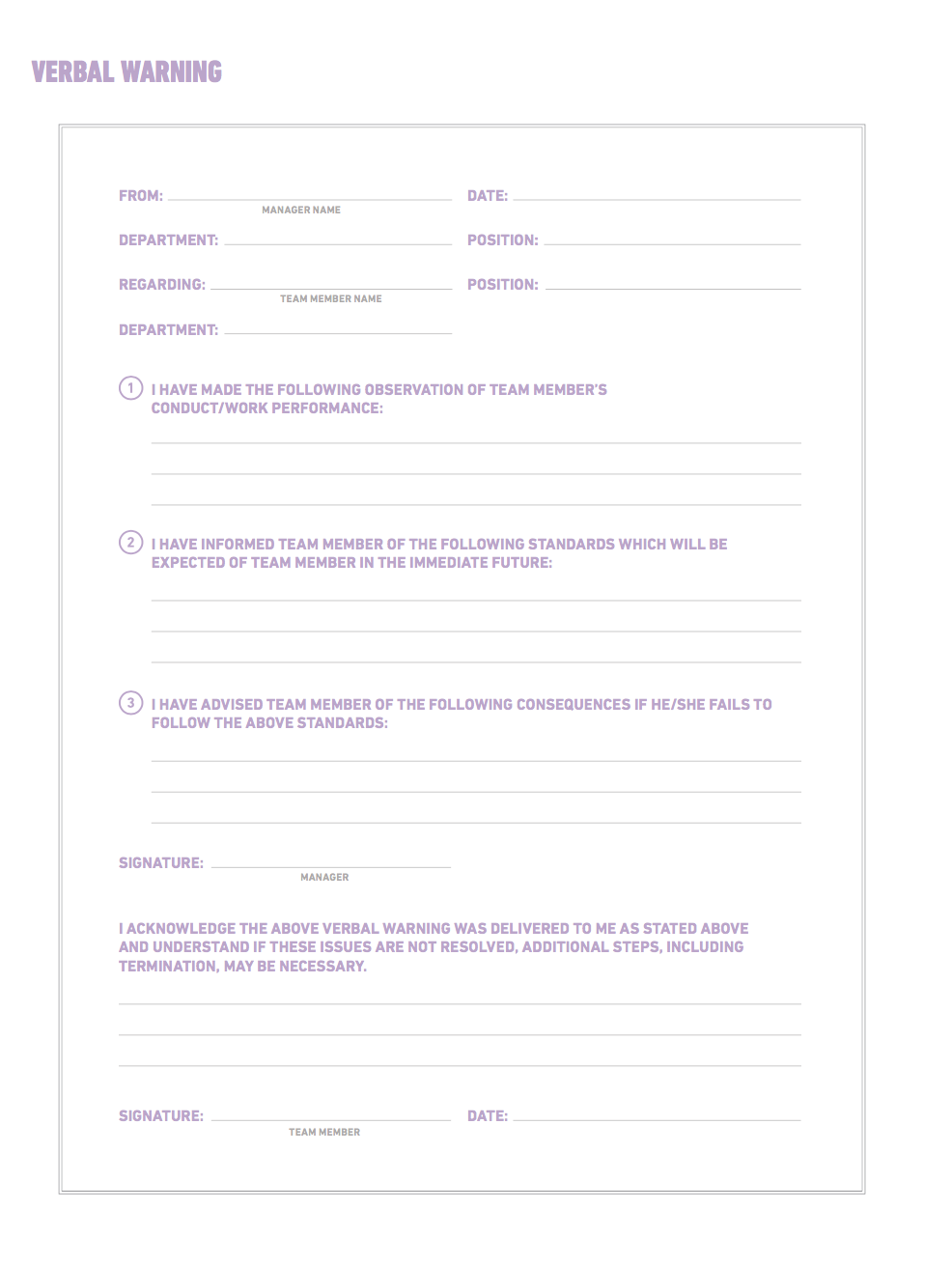 WRITE-UPS:
Write-ups are the second level of disciplinary action and carry a significantly more serious set of consequences. Below is a template that you can use for “written warnings.” 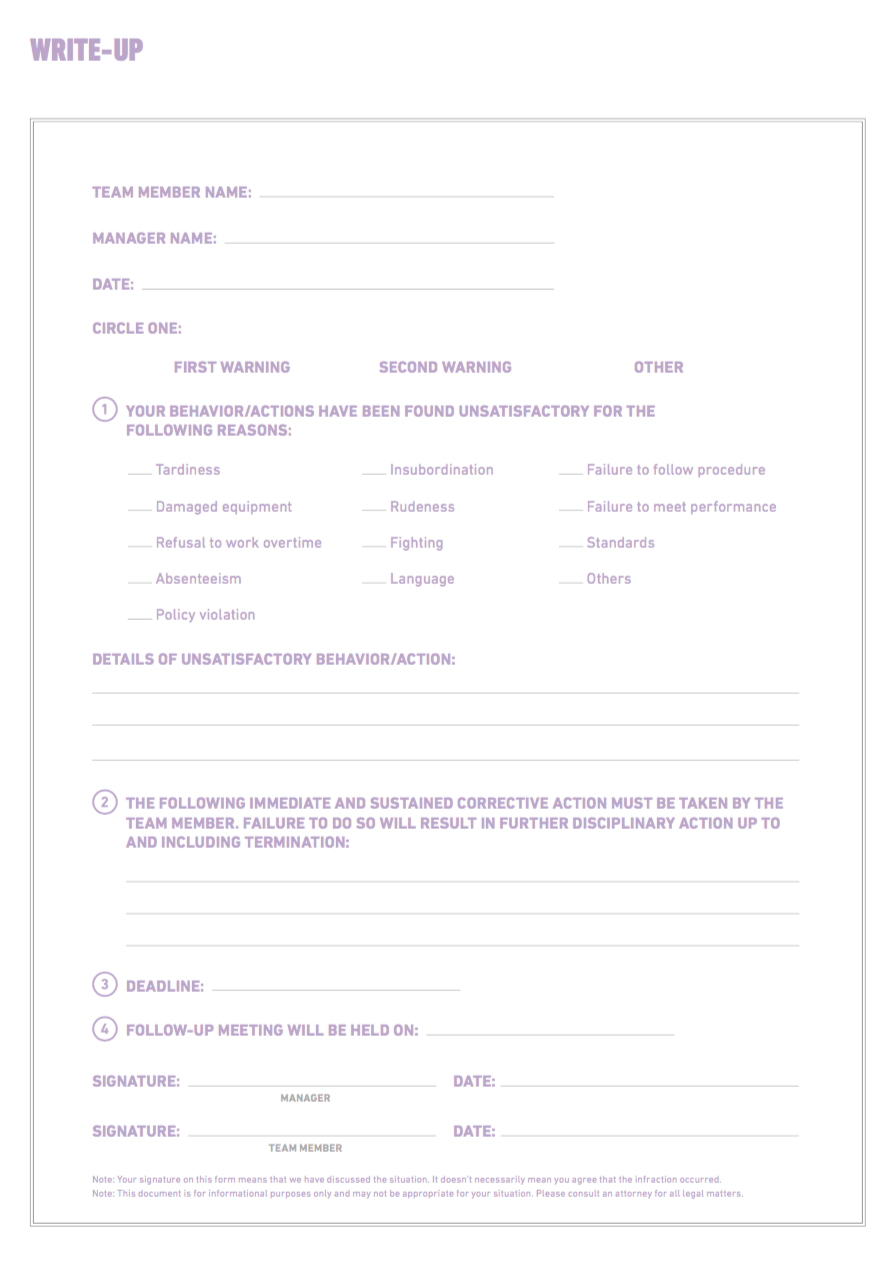 Remember the most important thing you as a leader can do for your team is to help them grow, and the best way you can help them grow is to be honest with them about both the good and the bad. As a leader, you have a clear responsibility to face the tough challenges and lead with courage. It takes courage to hold a standard and never waver, but it also takes great kindness. If you can combine kindness with courage, then you will be able to lead well and build a high performing team filled with growing employees. Remember, “Clear is kind and unclear is unkind.”