THE VERY BEST OF TEAM BUILDING

THE ESCAPE GAME IS PERFECT FOR TEAMS WHO WANT TO LEARN AND GROW TOGETHER.

Are you and your team feeling the monotony of meetings? In this Zoom-heavy and meeting-heavy world, we all need a break from the day-to-day. If your team works in-person every day, it’s important to have moments where they can get out of the office. And if your team is remote, team building is all the more important without the day-to-day interaction found in the office.

Whether you only recently started the remote working model or you’re an early adopter and your team has been remote for years, working remotely comes with its own set of problems.

In a recent Buffer survey of over 3,500 remote workers, while 98% of workers agreed with the statement that they want to continue to work remotely (at least some of the time) for the rest of their careers, they struggle with collaboration, communication, and loneliness.

The good news is The Escape Game Irvine can help! Our epic and perfectly crafted escape rooms are available virtually! Your team will take on one of our escape games via a live camera feed, hosted by one of our Game Guides, who will be your eyes, ears, hands, and feet in the room!

Companies and organizations that
communicate effectively are

Team bonding and team building are totally different but equally valuable. Bring your team members closer together and develop skills that will improve your office culture. The fun of collectively taking on an adventure, combined with the rush of an escape, creates a bond like few other activities can. They don’t even need to escape for this to work! The fun is in the adventure and the shared goal, with high-level teamwork built right in.

Team building with The Escape Game promotes vital skills and habits for any team,
from basic morale-boosting to real communication improvement.

See how other companies are using The Escape Game 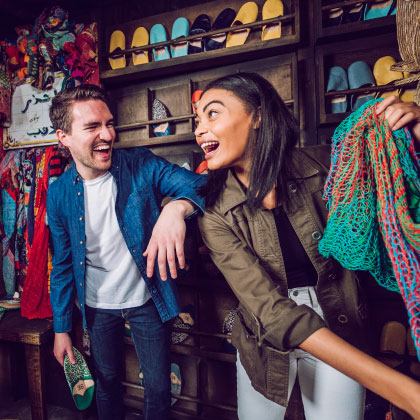 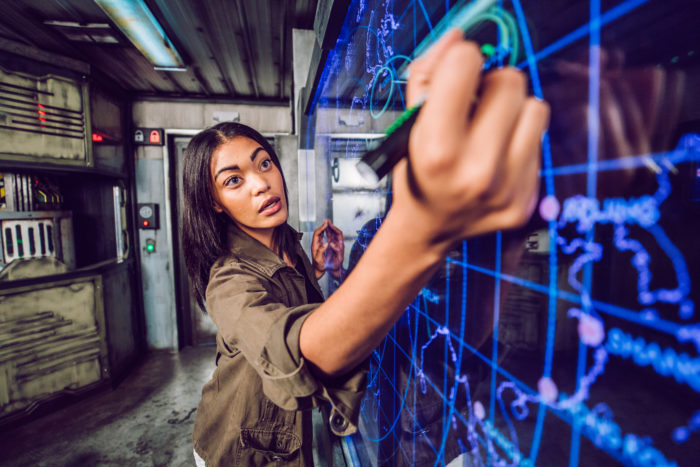 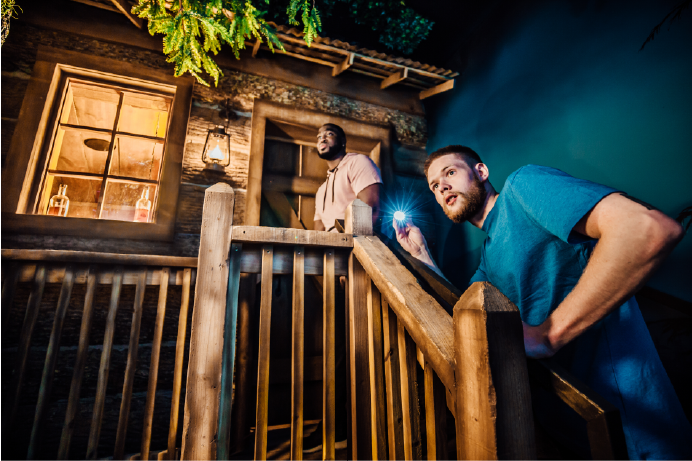 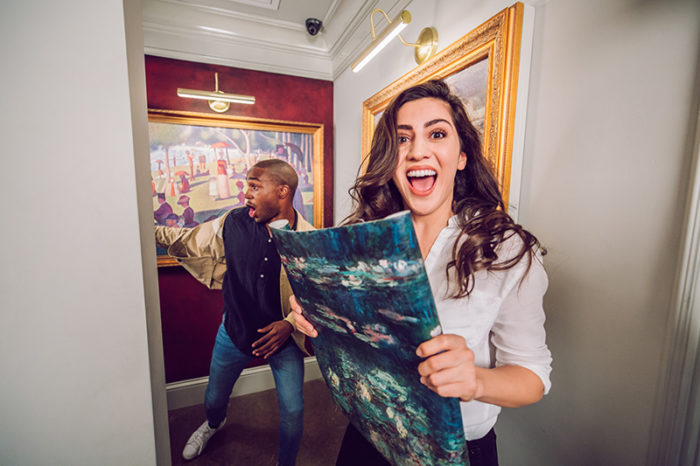 The Escape Game Is Epic For Everyone

At the Escape Game Irvine, your team will encounter a new and exciting world—it’s late night at a market where you’ve been sent to investigate, or you’re inside a prestigious museum looking for a stolen masterpiece.

Whether in-person or virtual, The Escape Game Irvine is an awesome place for your team to spend 60 minutes collaborating in a high-intensity, epic environment.

Not sure what to expect? Let’s take a look at some of our immersive worlds that your team will step into.

Gold Rush: For nearly two centuries, the hope of gold has lured people to the hills of Northern California. No one captivated more than Clyde Hamilton, a greedy old prospector who loved to gamble. Clye made too many bets with the wrong crowd and now he’s missing. You’ve been tipped off to where he stashed his gold…but so has the mob. Find it first!

Special Ops: Mysterious Market: You and your fellow agents were sent to investigate the area’s local market. It’s late, it’s quiet…but something’s not quite right. Just as you are about to wrap up your inspection, you encounter a twist you never expected. Should you have seen this coming?

Prison Break: The year is 1955. You’ve been wrongfully accused of a crime, and sentenced to life in prison without the possibility of parole. Your new “home” is a cell that once belonged to an inmate who disappeared without a trace…or did he? Some claim he escaped. Others swear he was murdered by the infamously cruel warden. But no one actually knows…can you escape before you suffer the same fate?

The Heist: Your world-class espionage outfit has landed you inside a prestigious art museum. A recently stolen masterpiece is presumed hidden within the office of the museum’s egotistical curator, Vincent Hahn. With the help of your intelligence agent on the outside, you have one hour to find your way into Hahn’s office, recover the painting, and slip away before Hahn returns.

Playground: Summer is here! Well, almost…If you and your friends are going to leave for summer vacation, you’ll need your final report card. Here’s the problem, you haven’t finished your work and these assignments are unlike anything you’ve encountered in a classroom before. Luckily, you’ve got a great squad and everyone brings something different to the table. Band together to ace the ultimate group project. Pass or fail, you’re in this together!

Our escape rooms have been designed with attention paid to every little detail. We want to create the most epic experience for your team. Let’s see what others have to say about The Escape Game Irvine:

“We’ve played a lot of escape rooms and the production values of these rooms are the best. The puzzles are fun and just challenging enough to be tough but solvable, the tech is fantastic and the theming of the rooms is amazing! The first room we did was one of the coolest rooms we’ve ever seen. You really feel like you’re in a cabin in the woods somewhere.

The game masters were great and overall, it was a great experience. Definitely a ‘can’t miss’ if you’re into escape rooms.”

“I’ve played almost 70 escape rooms to date and The Escape Game has some of the best games I have ever played. I played in group sizes of 3-5, with players experience-levels between one game and over 100 games played, and everyone enjoyed each game. The first we played was Prison Break, which was a blast from start to finish. The immersion was fantastic and the puzzles were well suited for the story. Next was Gold Rush, which was even better. There was an element in this game that I never thought I’d get to do in an escape room! Third was The Heist, which I had played previously in Orlando. Honestly, The Heist is my least favorite game out of the five currently at this location, but it’s worth playing if you are wanting to play another room without having to travel elsewhere. Fourth was Playground, which very easily secured a spot in my all time top five favorite games. Just play it, trust me. Lastly was Spec Ops, which had a fantastic transition between play spaces and unique puzzles for each of the spaces. This is not a company you want to skip playing. I HIGHLY recommend playing here, especially Playground, Gold Rush, and Special Ops. Thanks to Zack for having me and my team play!”

“This place is AMAZING!! I have done a ton of escape rooms, and this one is without a doubt my favorite. They put so much attention to detail in the rooms. I did the Gold Rush room, and it was so much fun! We completed it with 7 minutes left with just a group of 3. I like that it’s not just one room—you get to solve puzzles to get into other rooms. It was challenging without being too difficult. All of the props and decorations are extremely well thought-out and high quality! We will return!!!”

Here are some nearby spots to take your team before or after:

A good cup of tea is hidden within each and every one’s heart. On that relaxing afternoon, bathe in sunshine’s warmth, sprinkle by breezy wind, charmed by a lover’s smile, fulfilled by the pleasing aftertaste. Reminisce the touching satisfaction from that first cup of good tea, such unspeakable snugness will soak through your heart via a The Alley drink, it’s time for tea! Casually sitting in The Alley, wander and imagine the ideal life.

Puesto Los Olivos – Other side of the 405

Puesto Los Olivos’s story begins with tacos. As first-generation Mexican Americans, they have been immersed in authentic, mexican cooking since childhood. Traveling has filled their fascination with how local cuisine reflects the people, art, and culture of a city. They frequently visit Mexico City on the hunt for everything from innovative flavors to treasured family traditions handed down from generation to generation. This is where they bring all of that inspiration to life.

Wood Ranch is a lively, family-friendly, regional chain known for its BBQ, burgers, and happy hour deals. This is a great, casual spot to share a drink or a bowl of guacamole as you unwind after an intense, action-packed, epic 60 minutes. Whether you escaped or not, treat yourself!

Feeling overwhelmed trying to plan your event? No problem!

Our guest experience team is available via phone, email, or live chat to help you plan your day at The Escape Game.

CHAT WITH US
BACK TO TOP